ContiLeaks: Chats Reveal Over 30 Vulnerabilities Used by Conti Ransomware – How Tenable Can Help

Leaked internal chats between Conti ransomware group members offer a unique glimpse into its inner workings and provide valuable insights, including details on over 30 vulnerabilities used by the group and its affiliates, as well as specifics about its processes after infiltrating a network, like how it targets Active Directory.

In this blog post, we’ll offer background into Conti – one of the more prolific ransomware groups in operation today – dig into the leaked information, and offer concrete advice on how to protect your organization against Conti’s attacks.

The ContiLeaks began on February 27 – the work of an alleged member of the Conti ransomware group. This individual leaked a series of internal chats between members of the group to the general public. This isn’t the first time confidential information about the group has been leaked. In August 2021, an affiliate of Conti published a playbook of training materials given to affiliates, which provided our first insight into the ransomware group’s operation.

These leaks have allowed researchers to analyze more of the tactics, techniques, and procedures developing indicators of compromise associated with the group. Researchers at Breach Quest published an article on March 9 analyzing the ContiLeaks, which included a list of vulnerabilities the group appears to have been using to target organizations.

First discovered in 2020 by researchers at Carbon Black, Conti is a ransomware group that operates a ransomware-as-a-service model to deploy the Conti ransomware.

Ransomware-as-a-Service (RaaS) is offered by ransomware groups and gives affiliates — cybercriminals looking to partner with RaaS groups — access to ransomware that is ready to be deployed, as well as a playbook to help guide their attacks. RaaS groups take a small cut of paid ransoms, providing the bulk of the profits to affiliates.

Conti has risen to prominence over the last two years, earning a reported $180 million in profits from its attacks, according to Chainalysis. It’s also gained notoriety for attacks against the healthcare sector, including at least 16 U.S. health and emergency networks. Most notable was Conti’s attack on the Ireland Health Service Executive (HSE) in May 2021 in which the group demanded a $20 million ransom, which the HSE refused to pay.

Conti’s focus on the healthcare sector isn’t surprising. In our 2021 Threat Landscape Retrospective report, we found that 24.7% of healthcare data breaches were the result of ransomware attacks, and ransomware itself was responsible for 38% of all breaches publicly disclosed last year.

Which vulnerabilities are Conti and its affiliates using?

Ransomware groups like Conti use a variety of tactics to breach the networks of prospective targets. These include phishing, malware and brute force attacks against Remote Desktop Protocol.

Conti has also been linked to EXOTIC LILY, an initial access broker (IAB) group. IABs are focused on obtaining malicious access to organizations for the purpose of selling that access to ransomware groups and affiliates. However, exploiting pre-and-post authentication vulnerabilities also play an important role in ransomware attacks.

As part of the leaked affiliate playbook, we’ve seen reports that Conti and its affiliates have been using the PrintNightmare and Zerologon vulnerabilities against targets. However, the ContiLeaks revealed an additional 29 vulnerabilities used by the group.

Additionally, there are reports that Conti and its affiliates have targeted vulnerabilities in the Fortinet FortiOS found in Fortinet’s SSL VPN devices to gain initial access to target environments.

The following is a breakdown of the types of vulnerabilities used by Conti and its affiliates:

We’re also aware that Conti and its affiliates have used CVE-2021-44228, also known as Log4Shell, as part of attacks beginning in late 2021.

When looking at the impact of the various vulnerabilities disclosed specifically within the ContiLeaks communications, an interesting pattern emerges: nearly three quarters of the vulnerabilities on the list are elevation of privilege flaws, which signifies that the group is largely using vulnerabilities that support post-exploitation activities. 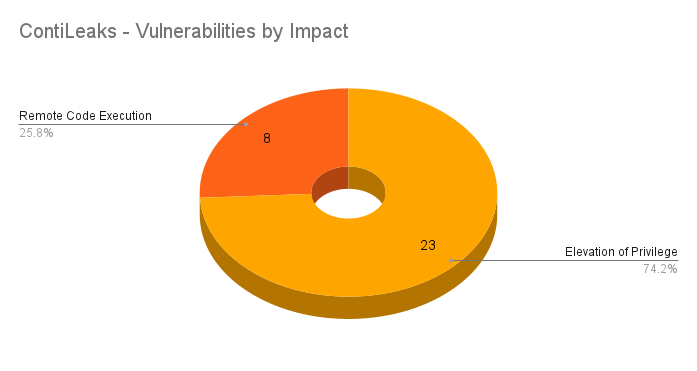 Given that the group and its affiliates can find different entry points into an organization outside of vulnerabilities, but need to elevate privileges in order to wreak havoc, it is not surprising that most of their vulnerability toolkit is focused on elevation of privileges.

Through the ContiLeaks, we learned that Conti follows a set of processes once inside a network. To target Active Directory (AD), the group will seek out domain administrator privileges, as is common amongst ransomware. For ransomware groups, AD is a valuable tool to help achieve their intended goal of encrypting systems across an organization’s network.

Conti and its affiliates will try to leverage Zerologon to obtain domain admin privileges, or they will seek out “potentially interesting people” within an organization’s AD according to BreachQuest.

The group and its affiliates target AD through a variety of means including:

The majority of vulnerabilities used by the Conti ransomware group and its affiliates have been patched over the last few years. The oldest flaw on this list was patched six years ago in 2015.

A list of Tenable plugins to identify these vulnerabilities can be found here.

To enable our customers to identify all of the known vulnerabilities leveraged by the Conti ransomware group and its affiliates, we will be releasing scan templates soon, while dashboards for Tenable.io, Tenable.sc and Nessus Professional are available now. 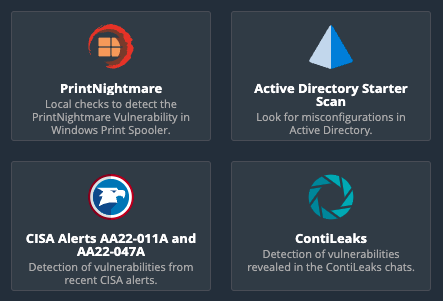 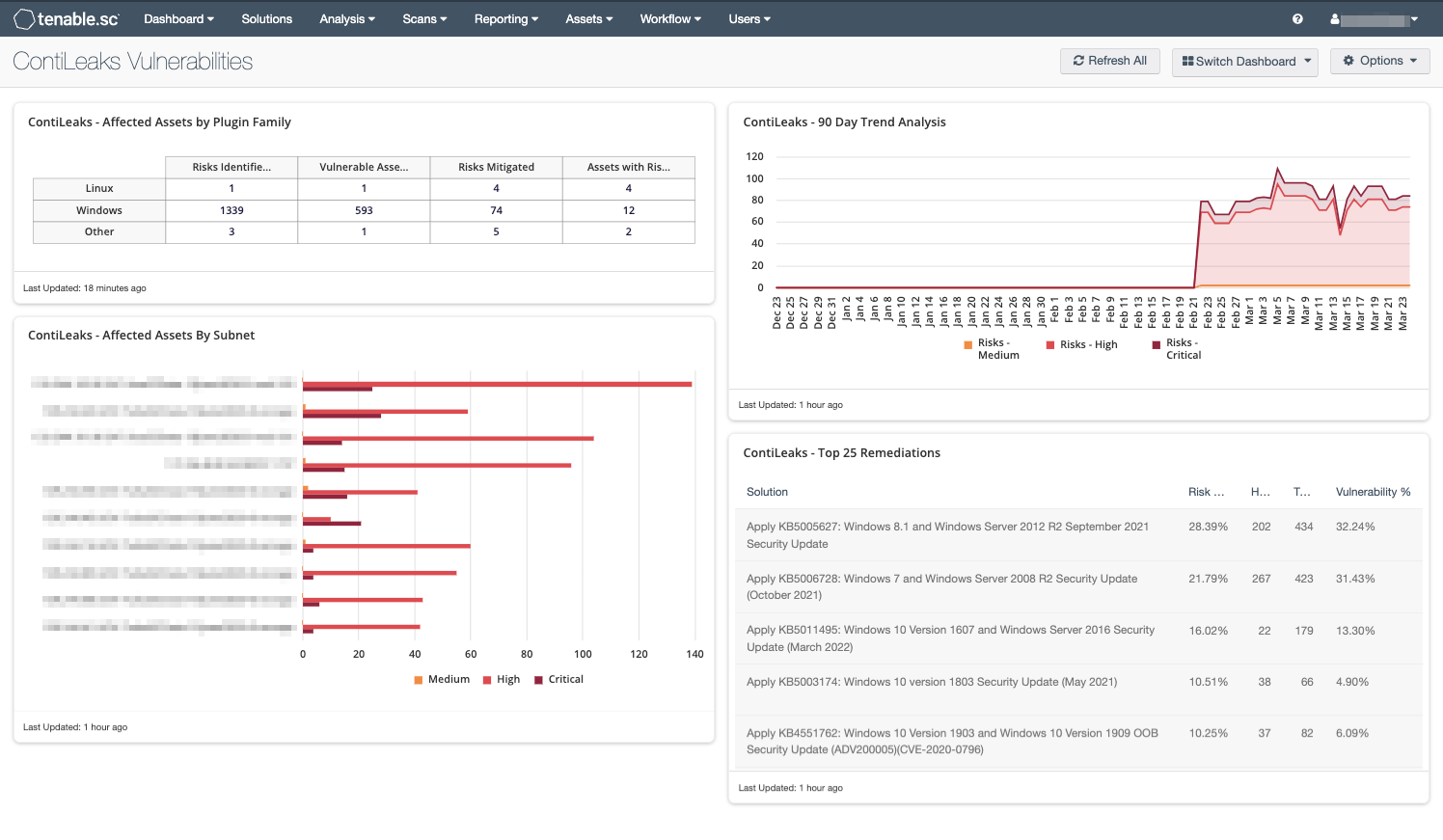 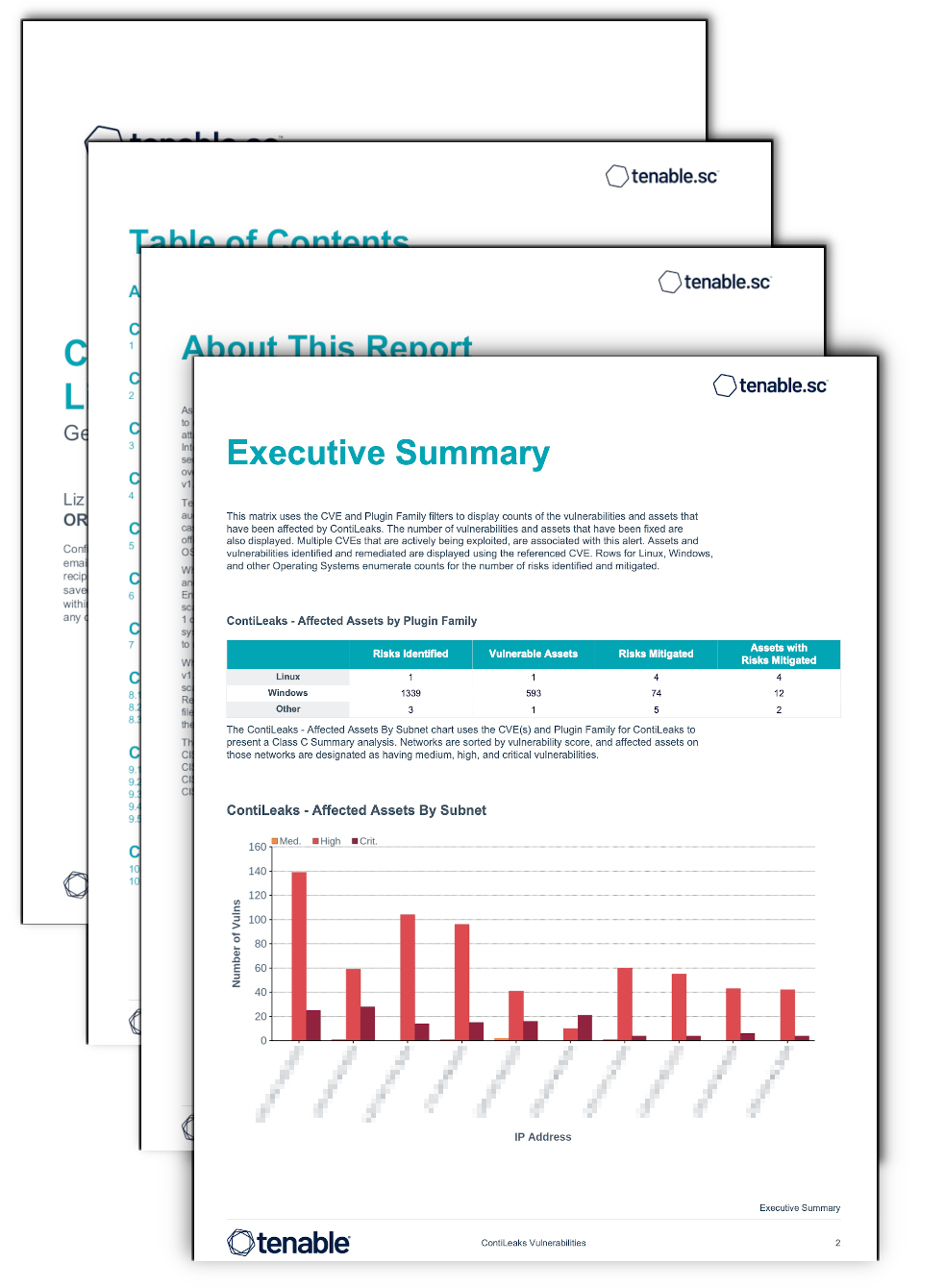 For more information on the dashboards and reports, please refer to the following articles:

Indicators of Exposure view in Tenable.ad

For Tenable.ad customers, we have detection and prevention solutions in the form of Indicators of Exposure (IoE) and Indicators of Attack (IoA). IoEs are a preemptive way to find and address gaps within your AD infrastructure to eliminate attack paths for ransomware groups and other cybercriminals, while IoAs detect attacks in real time.

The following is a list of IoEs and IoAs derived from the findings within the ContiLeaks: